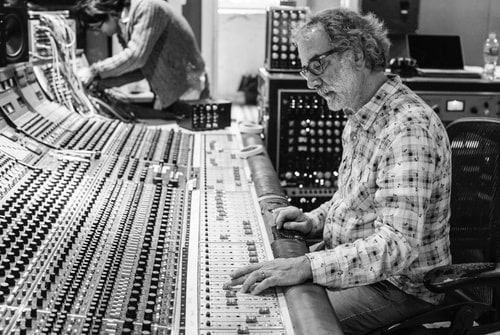 Who are you, and what do you do?

"My name is Inigo Montoya, you killed my father, prepare to die!"

Actually, my name is John Agnello. I'm a producer/engineer. My first job as a teenager was working for my brother at Eventide, during the summer of 77. I put together Delay Lines and Flangers and did deliveries around the city. In 1979, my brother got me an interview at the Record Plant in Hell's Kitchen, Manhattan. I got the job.

Although I got thrown out of my first session, by the owner of the studio, Roy Cicala, I lived to assist another day. I became an official assistant in 1981. As I moved up the ladder to number 1 assistant, I got to work on albums with Cyndi Lauper, Iggy Pop, John Cougar Mellencamp, The J Geils Band, The Michael Schenker Group, Twisted Sister, Yoko Ono, Meatloaf, among others.

I transitioned to engineer working with Philly band, The Hooters. And I haven't looked back since. I was lucky to learn my trade from some of the best in the business. William Wittman, Rick Chertoff, Jack Douglas, Jay Messina, Shelly Yackus, Rod O'Brien and Dave Thoener. The creme de la creme, whatever that means.

During the early 90's, a chance meeting at Columbia Records led me to meet J Mascis and Don Fleming. A year later I was working in the studio with Dinosaur Jr. and The Screaming Trees. Till this day, I still work with J Mascis, mostly mixing for him.

Both the Dino record, "Where You Been" and the Trees record, "Sweet Oblivian" were very successful when they came out which was very good for my career. I spent the rest of the decade wearing flannel in Seattle and making very good grunge records. Anyone who says Nirvana has no influence of music in the 90's is either an idiot or in denial. And yes, I've heard people say that.

The 00's brought me many gigs producing records. Certain artists like The Hold Steady and Kurt Vile did very well on the records we worked on together. I mixed two Drive By Truckers records and became friends with them. Very great people. Also did a bunch of work with Jay Farrar, solo and with his band, Son Volt. I'm also still working with him. Great guy. Great talent.

As my career progressed, I began to work outside the country. Fun records with bands such as Madrugada and Turbonegro from Norway were a highlight. Also my relationship with amazing Spanish producer, Paco Loco, brings me to the south of Spain once a year to mix for him. That does not suck.

Currently still doing my thing. Very cool records with younger artists, such as Waxahatchee, Nothing, The Sidekicks, Hop Along, and Jessica Lee Mayfield have been highlights. My work with great band, Phosphorescent has yielded the song, "Song For Zula" which was highlighted in a couple very popular movies, namely SpiderMan 3.

Also, in the last two years, I've hosting a podcast with my bestie, Stewart Lerman, a super talented music producer. It's called Gear Club. It's the "Car Talk" of audio podcasts.

What hardware do you use?

I was born analogue so I still have an affinity to analogue gear. Big fan of Daking anything. I love the mic pres for guitars, but they sound great on anything. API mic pres and 560 eq's are fun to use. I have been working on a bunch of API consoles lately. Love them. Of course 80 series Neve is also fantastic, but I don't own any of that stuff.

My favorite limiters and compressors are the LA-2A, the classic tube limiter. Not a Fairchild, which is the ultimate, but mine sounds great on vocals. For stereo compressors I love the ADR Compex, the Neve 33609, the Fatso and the UA 1178. All for different reasons. Some as buss comps and some as sidechain comps. I find Distressors and Der Essers super useful for mixing.

Who's got two thumbs and loves guitar pedals? This guy. Electro Harmonix, mostly vintage ones, like the POG and Big Muff and Holy Grail, which is more current but still sounds great. There's a great company out of Vancouver called Union that makes fantastic pedals. Their Sub Buzz is great for reamping. I use it all the time.

For efx, I still use tape delays and plates for reverb. I love all the Eventide pedals. I can get a cool effect with any of the all the time. I also still use my 1980's vintage Eventide flanger. Nothing like it. Also, if the studio has Leslie, I'll run shit through it.

Pro Tools is everywhere and super useful. Clip gain is very useful in mixing. For converters, I just use what the studio has. That's the freelance mixer in me. I love the Eventide plugins. They do it right. And I know first hand. I tend to use plugins that are representative of the analogue gear I have. I think it's a comfort factor. Whether in the box or on a console, I do all my sidechain compression and approach mixing the same way. It works for me great.

What would be your dream setup?

My dream setup, which hopefully I'll have in my basement someday soon, is an API 1608 console. Small but effective. All the UAD plugins. All the Eventide plugins. Some Buerle A to D converters. It's kind of impossible practicality wise, but I'd love an Ampex ATR 1/2" tape machine for mixdown. But I'm not a tech so it doesn't really make sense. Would love one rack of hardware listed above and a foot massager.