"Using the iPad Pro as my development machine"

Jan 7, 2019 at 12:00 I bought an 11” iPad Pro to use it as my main development machine. Let me say it’s an attempt. I’m a huge fan of Bret Victor and try to immerse myself with his ideas, papers, and videos. One of the things he talks about is how we should look into new mediums to unleash our creativity, to create “things” that were not possible before. 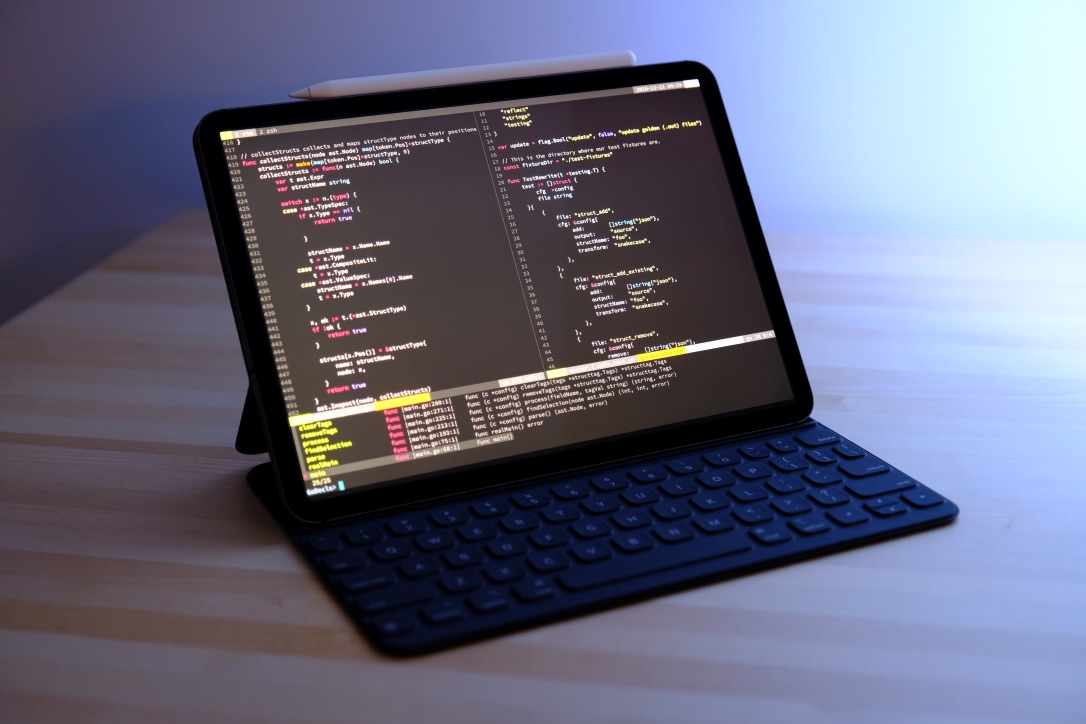 The iPad is a very different device. I know that many people (including me) are using it already for so many years. However, the iPad has improved a lot and has two new ways of interactions that are now a first-class citizen in the iPad ecosystem:

I had a MacBook Pro 13.3”, it belongs now to my wife. This was a perfect excuse for me to try out the new iPad Pro and experiment with it. I wanted to see if I could test, write and deploy my day-to-day projects. Is that possible? Let’s see! The first thing I started doing was to install Blink.sh and experimenting with it. Blink.sh is a Terminal Emulator and has sandboxed local terminal access, which you can use for basic stuff. It includes the following commands:

As you see there is tons of stuff you can start using, but it’s not a full featured OS, which means you’re very limited to what you can use. However, there are a couple of commands that are very useful (i.e: scp) and I’ll show later in the blog post how I’m using it in conjunction with other iOS apps. After firing up Blink, it greets you with a blank terminal and a shell prompt. That’s it. There is no documentation, no obvious settings, etc.. Initially, even for me as an experienced terminal user, I didn’t know what to do. I started to explore the commands and found a config command, that would open the settings for Blink.sh. From there I started digging into the settings. 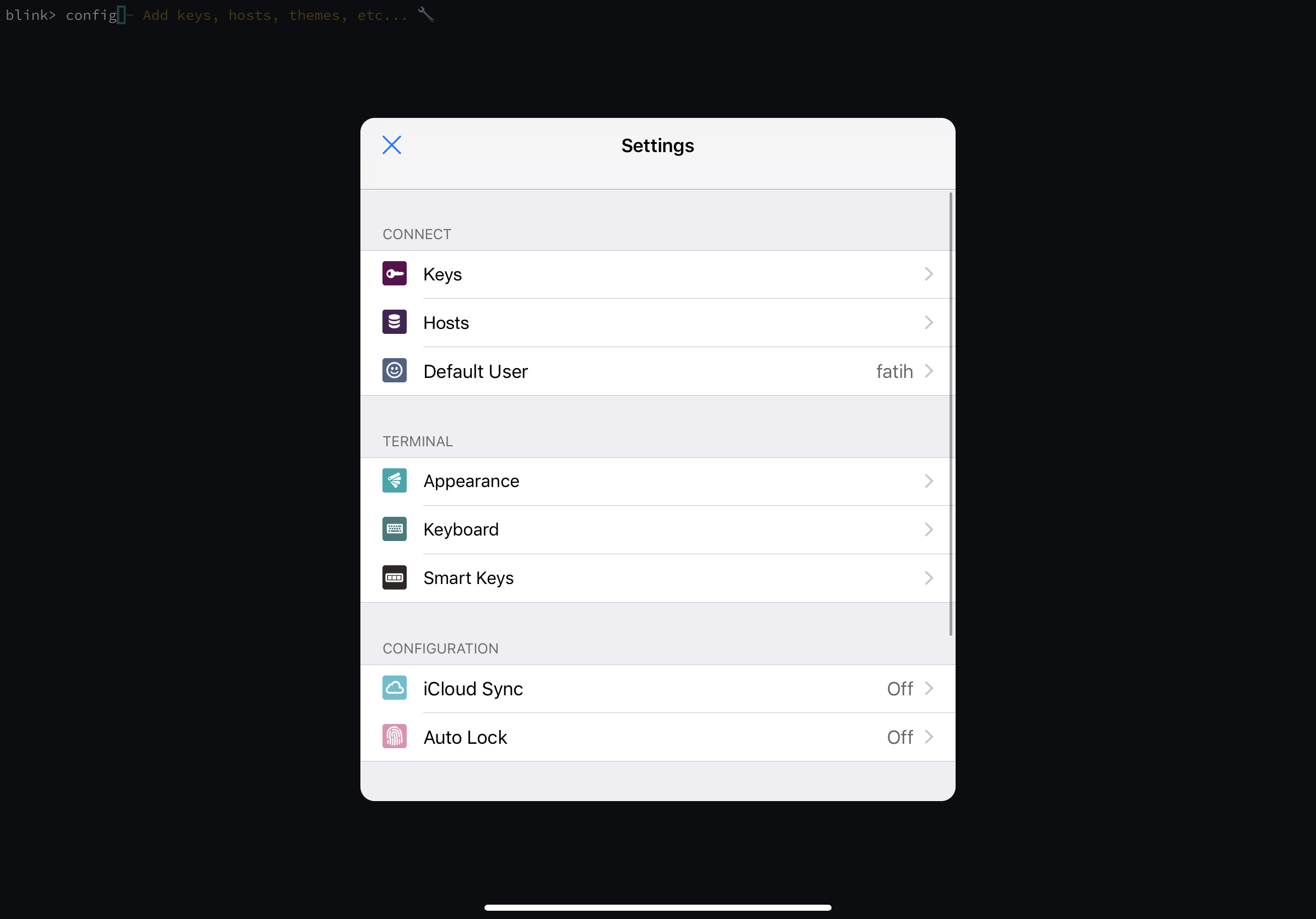 Before I go and show some of the important stuff, we need to first create a remote workstation which we can start using as our main development machine. Obviously, there is no way to develop on an iPad Pro. Even with the sandboxed emulator above, it’s not useful at all. There are projects like iSH, which is a x86 emulation and provides a full Linux shell (it’s doing it by doing syscall translations). However it’s still in prototype mode and I haven’t started to use it yet, but it’s something I want to check in the future again. There are also applications like Coda to let you edit and develop with HTML, CSS, etc… But I’m not a web developer and I need a real terminal with usable tools to get my job done. Now let’s continue creating a workstation.

There are several options to create your remote workstation. The easiest way is just to create a VM instance (say a droplet on DigitalOcean) and then start using it. Install a couple of packages, your favorite programming languages, tools, etc.. and you’re done! However, the problem with this is, what if you somehow lose your machine or some of the data? Or you have decided to change your cloud provider? Maybe you have decided to start from scratch? Let me start with some history: I started first creating a provisioning script and used Packer to create an image. This image would be then something I would use to start my instance. The problem with this approach was that the interaction and development cycle of the image was just too long. Suppose I wanted to add a new package/tool to my final image, I had to change my script, create a new image, wait at least 30 minutes (depending on your network and script) and see the end result. Machine images are useful if you want to reuse them between thousands of instances at the same time, but for our needs, it was overkill. 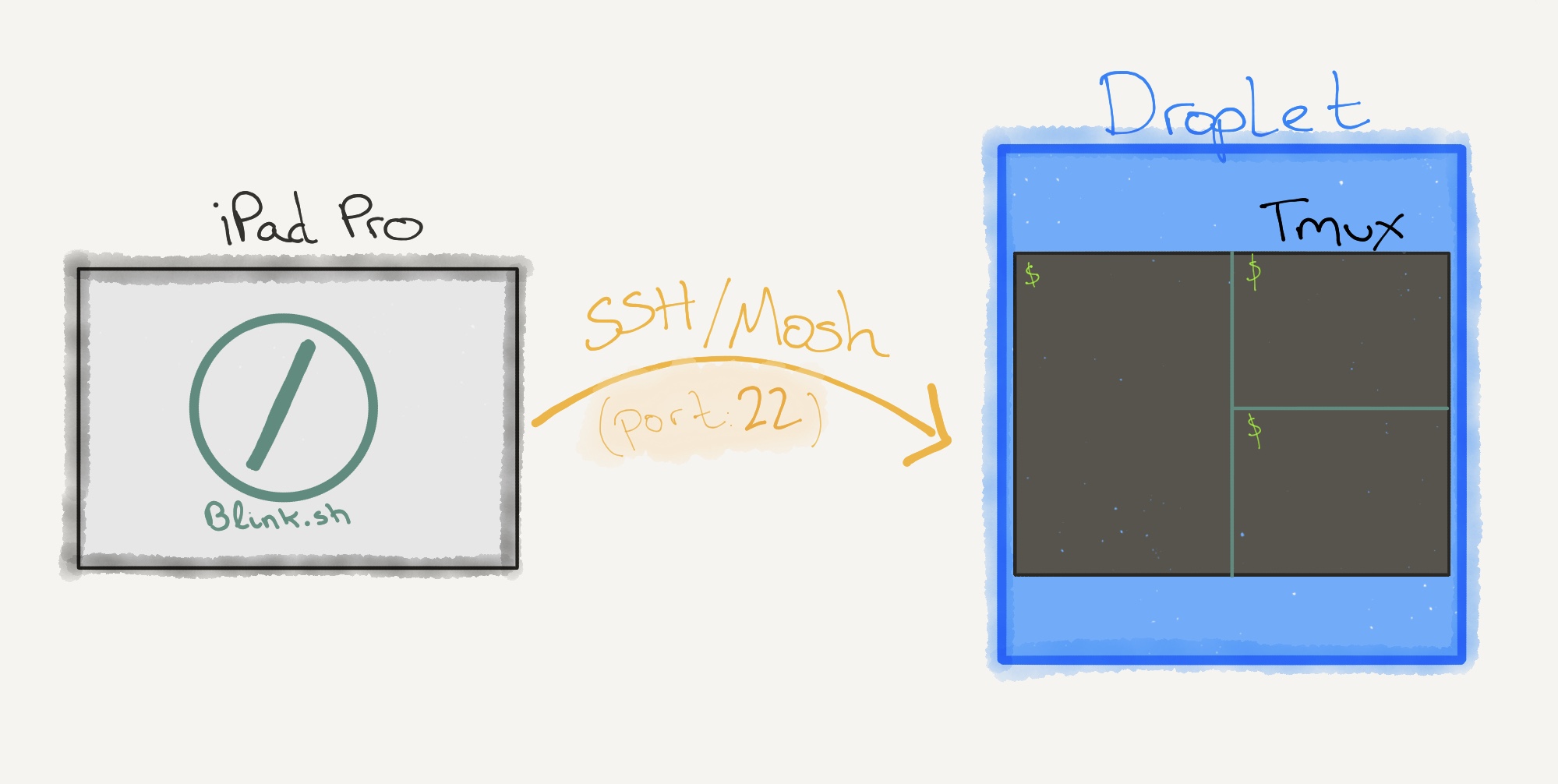 Remote workstation (first iteration) So I ditched the image idea and started using Terraform by dynamically provisioning my droplet during (or after) the droplet creation. This would mean that I didn’t have to maintain and store an image, and it would create my droplet with all the packages I provisioned. The issue with this approach is, as I figured out using it for a couple of weeks, at some point, I had to install new tools or change some of my configurations. Every time I did it, I had to make sure to also update the provisioning script I was using with Terraform. If not, that would mean if I had to create a new remote workstation from scratch, I had to reinstall all the tools again. So what’s the point of using a provisioning script then? I’m a very dedicated and focused person, but even I couldn’t keep up with syncing my host machine and my provisioning script (you were right qmx).

After using this approach for a long time, I’ve come to the conclusion that using a Docker container comes with its own quirks and issues. Some of these are:

-"Using the iPad Pro as my development machine"