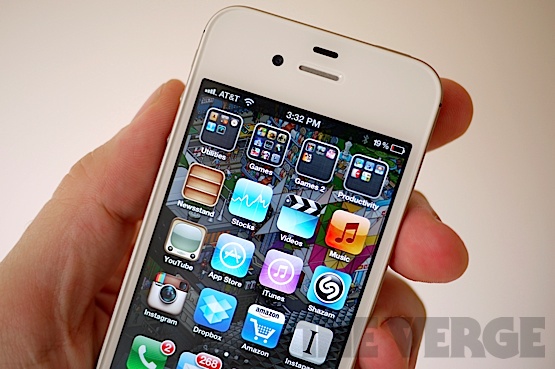 Unlike the exterior, there are obvious improvements when it comes to the phone’s internal components. As I mentioned, the device utilizes the dual-core A5 CPU (the same as in the iPad 2), and based on spec monitoring software on the phone, it’s clocked at 800MHz. That’s not to say it feels slow, however. The device has 512MB of RAM onboard, which came as a bit of a surprise considering that’s the same number as the iPad 2 and original iPhone 4. You can purchase the phone in 16GB ($199 on-contract), 32GB ($299), or 64GB ($399) variations — I tested the 64GB model. For radios, the phone has that dual-mode CDMA / GSM chipset (most likely Qualcomm’s MDM6600), Wi-Fi 802.11b/g/n, and Bluetooth 4.0. The phone also touts a digital compass, GPS chip, accelerometer, ambient light sensor, proximity sensor, and three-axis gyroscope. But you knew that already, didn’t you? The rear camera has been massively improved — and that’s saying a lot considering the original iPhone 4 sensor and lens were a pretty lethal combo. The iPhone 4S now has an 8 megapixel sensor and improved optics which the company claims delivers point-and-shoot quality photos. The phone is also capable of handling 1080p video. The front-facing camera remains unchanged from the iPhone 4, however, clocking in at a measly VGA resolution. I’ve got more on the rear camera below, of course. The display on the 4S is Apple’s well regarded 960 x 640 Retina Display, and it looks no less impressive now than it did when the iPhone 4 was first released. One thing I did note, however, was how much less contrast-heavy the screen looks in comparison to the previous model. The iPhone 4S has a noticeably different color tone, and blacks seem far less dark. This isn’t necessarily a bad thing; when comparing Dead Space (a pretty dark game) side-by-side, I found the iPhone 4S display more eye-pleasing. Still, the newer screen definitely has a slightly more green-tinted, washed-out look compared with the older device. 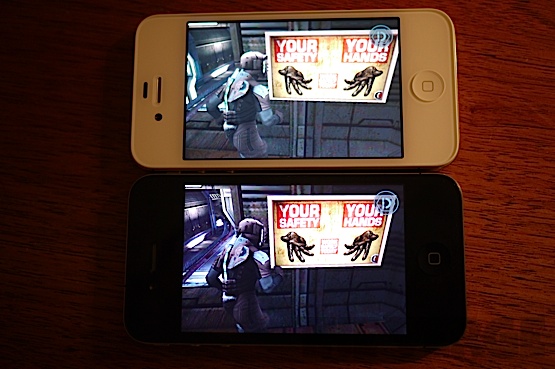 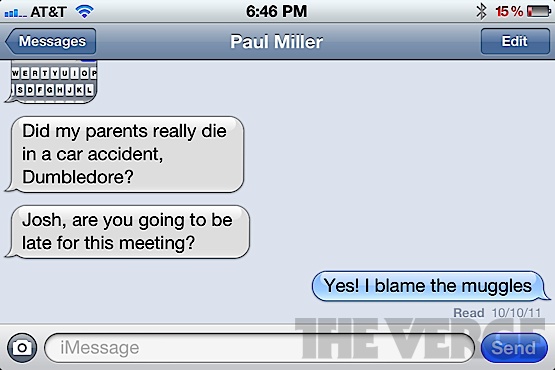 As I said in my intro, the big story with the iPhone 4S isn’t so much about the hardware as it is the software. iOS 5 is a huge update — maybe Apple’s biggest ever — and there’s lots to unpack. It’s also important to note that most of these improvements will be found on the iPad and iPad 2, iPod touch 3rd and 4th generation, iPhone 4, and iPhone 3GS — it’s not just the 4S that’s getting an update. For starters, don’t expect a completely new look and feel to the operating system. iOS 5 is nearly identical to the last version of the OS, save for some pretty notable improvements in functionality. The biggest and probably most desired (at least by more tech-savvy users) is improved notifications. Gone are the maddening, intrusive pop-over notifications we’ve been living with since the first version of iOS. Now when you get a message or new email, you see a notification at the top of your screen which doesn’t interfere with what you’re doing on the phone. You can swipe towards the left of the screen on these messages to make them disappear. Needless to say, this is a welcome change from older versions of the software. Apple also takes a page right out of Android’s playbook and now utilizes an almost identical "window shade" to collect all of your notifications which you can open by swiping downward from the status bar. Inside the shade (Apple calls it the Notification Center), you’ll find updates from your apps (which you can order manually or by most recent), and Apple has even included a couple of widgets for weather and stock information. You can manage your notifications app-by-app, and touching one of the messages takes you to that application. Apple has also introduced notifications on the lock screen. When an item appears on your list and the phone is locked, you can drag that specific notification across the screen to jump straight into the app. It’s actually pretty handy, though hardly an original concept. Samsung Android devices with TouchWiz do pretty much the same thing. The company has also included a new messaging component to its standard crop of SMS and MMS messages called iMessage. This service is unique in that it works across devices (so the iPad and iPod touch get the app too), and it syncs your communications on all of the devices you use with the same account. Many people (including yours truly) have described this as a BBM killer — and in use it definitely feels that way. Not only is the service free and works across 3G or Wi-Fi connections, but it does more than just send texts. You can include photos, videos, locations, and contacts, and it will tell you when messages have been read by the recipient or when they’re typing something back. Oh, and it’s really fast. Messages were delivered almost instantaneously. If you’re a BlackBerry user who’s been reluctant to leave because of BBM, this may be the piece that pushes you over the edge. Apple has also added some new applications to the mix. Reminders is a to-do list with some extra functionality, like the ability to set locations as triggers for alerts. So you can tell the phone to remind you about something when you arrive or leave a specific location. It’s a pretty neat trick, though it takes some getting used to to make it a part of your workflow. The Reminders app also ties in nicely with Siri (a lot more on that in just a bit). 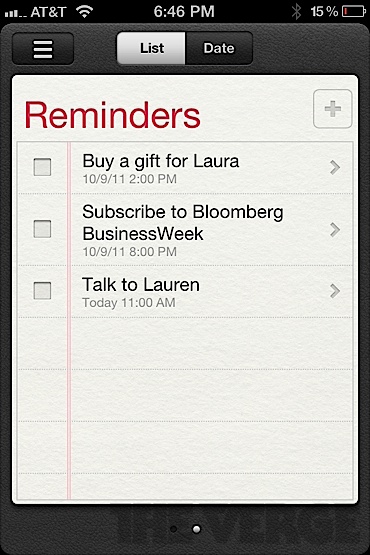 There’s also a new content app called Newsstand, which is like iBooks for periodicals. At the time of this writing, Apple hadn’t flipped the switch on the service yet, so I didn’t have a chance to test it out. When it is live, you’ll be able to get new issues of your favorite magazine or newspaper downloaded automatically to your device in the background. The company has also made tons of little nips and tucks all over other pieces of the OS. Twitter integration is now built-in, so you can Tweet links, photos, or videos without having to jump into the app. The photos application has been updated to allow basic photo enhancement, red-eye reduction, and cropping. Safari has been updated to include tabs in the iPad version, and is generally way faster on the iPhone 4S than pretty much any other mobile browser I’ve used. In a side-by-side comparison with the last generation iPhone, the 4S seems blazing. The new phone scored a 2246.8 in SunSpider, while the original iPhone 4 clocked in at just 3591.3. Apple has also added its own take on Instapaper for the browser called "Reading List," which lets you save articles to read later in a cleaner text layout. It can also reformat a page you’re viewing in the browser to make it more streamlined (and interestingly, to compact a multi-page article into a single page). Finally (and mercifully) Apple has cut the cord on syncing by adding Wi-Fi syncing options that let you manage your phone almost entirely without a cable attached. As long as you have the latest version of iTunes, you can sync apps, music, video and settings over your local network without plugging in. You have to set the service up using a cord to start, but then you’re able to access and sync your device whenever and wherever you want (on your network, that is). You can also now set up a new device out of the box with nothing more than an internet connection. 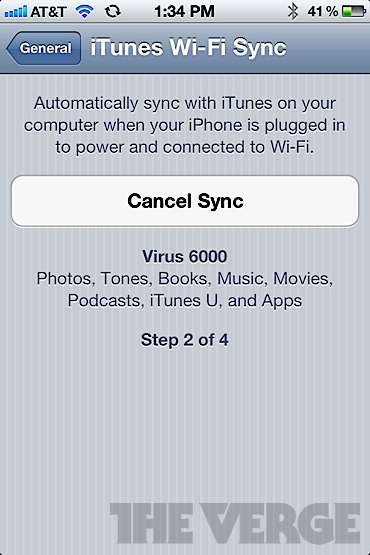 "PC Free" (as Apple calls it) worked mostly without issue for me, though there were times when I couldn’t get my laptop to recognize my phone on the network. A reboot seemed to fix the problem, and it’s possible I was having issues because I was syncing two different phones to the same laptop. The new software pieces are very welcome, but there are things about iOS that have begun to feel dated to me. In particular, the OS still feels stuck in this mode of use where you’re constantly jumping in and out of applications blindly, either to get information, or catch them up to the present. That can be frustrating when you’re trying to keep up with something like Twitter. Though the app will alert you that you’ve got new messages to read, it doesn’t download your content until you’ve opened up the program and let it refresh. The same is true for mail, and even messages you receive in IM or IRC apps. And I know I’ve said it a million times, but the fact that Apple still doesn’t provide auto-updating icons on its homescreen seems crazy to me. Yes, we now have a weather widget in Notification Center, but why doesn’t the icon change too? I feel like there’s an entirely new market for developers just waiting to make "widget icons" (think realtime clock faces like those just added to the iPod nano), yet Apple seems reluctant to give users more information on their home screens. That lack of glanceable information coupled with the delay of having to open an app to get information creates a feeling of disconnect for me that I find bothersome. Having been using a Nexus S prior to the iPhone 4S, I couldn’t help but notice the pause — however small — that Apple’s OS puts between you and realtime content. Every time you open an application, even if it’s saved your state, you still feel like you’re moments behind where you’re supposed to be. For the broad user base Apple wants to hit with these products, this will probably never be an issue. But I do think there are places in iOS 5 that still need work. -"iPhone 4S review"