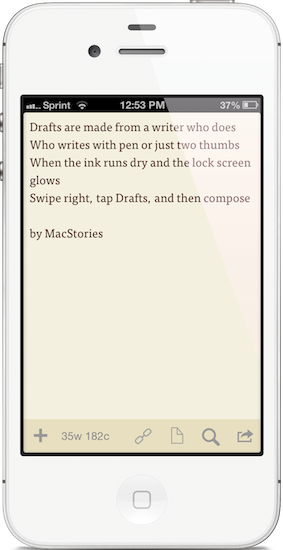 “Drafts are made for a writer who does. Who writes with pen or just two thumbs. When the ink runs dry and the lock screen glows. Swipe right, tap Drafts, and then compose.” I like to think of Drafts as the Field Notes of iOS. It’s inexpensive yet of high quality, unassuming but sharp, highly portable and convenient. While the icon, a simple white chiclet key, doesn’t emphasize Draft’s suave user interface, it is symbolic of the keyboard shortcut for Safari and other browsers, where ‘command + D’ adds the open webpage as a bookmark. The name Drafts itself may curtail ideas of long-form note-taking, although it’s not antagonistic towards writers feeling inspired to write more than a few sentences. Drafts is considerably the everyman’s notebook, unfraught with bindings and covers, instead fitted between two panes of glass in Apple’s iPhones. Drafts, for those whom haven’t read the original review, is simply a digital notebook for capturing thoughts, lists, and ideas in plain text or Markdown. Those ideas can then be shared with social networks like Twitter or Facebook, your email or calendar, with friends on Messages, to a capturing tool like Evernote, or into a folder on Dropbox. If you’d like, you can use it like Birdhouse for drafting Tweets, or you can use it like Notes for grocery lists and reminders. No matter how you use it, your journal is held together in a simple list, organized by date last accessed, and is quickly searchable. 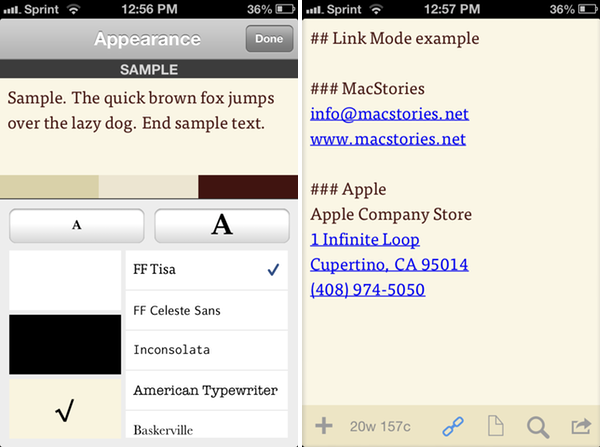 Drafts 2.0 on the iPhone is more sophisticated, smartly polished, and fast to sync notes between multiple devices. Amongst the new fonts added is the standout FF Tisa (my choice of font in Instapaper), which makes any prose look intelligent and authoritative — it’s especially good looking in larger font sizes. Draft’s quite adept toolbar makes convenient the long (but not too long) list of spruced up actions for sharing, copying, and deleting of notes by dragging it to the top of your iPhone, while dragging it to the bottom allows one to simply review their text in full screen. Full screen reading also reveals a clever button for link mode, which turns plain text home and business addresses, phone numbers, email addresses, and web addresses into tappable links. Part of me is conflicted, however, with whether link mode should simply integrate and replace ‘Markdown: Preview.’ (I think it should.) 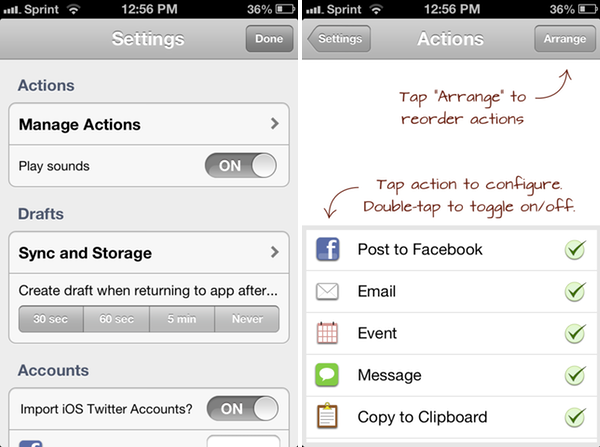 In Drafts’ settings you’ll find a new series of buttons for a timer which, once you leave the app, will decide when (if not ‘Never’) to automatically present you with a blank page. Also in the settings, the actions mentioned earlier are readily modifiable through a helpful management view, allowing you to arrange, enable and disable which actions are presented to you in the main interface — as you may notice, plenty of new third-party app interactions have been added, including new output actions such as ‘Append to Dropbox.’ 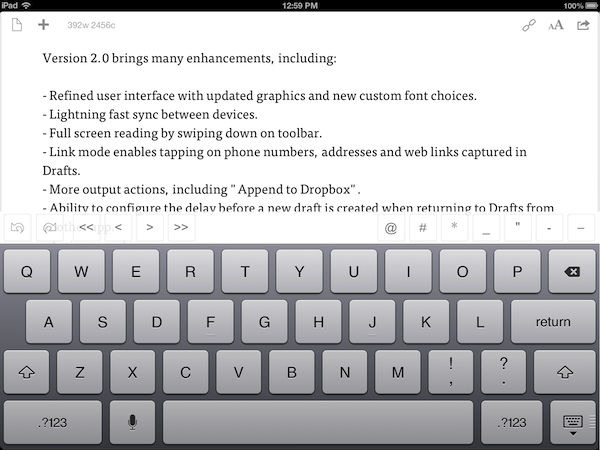 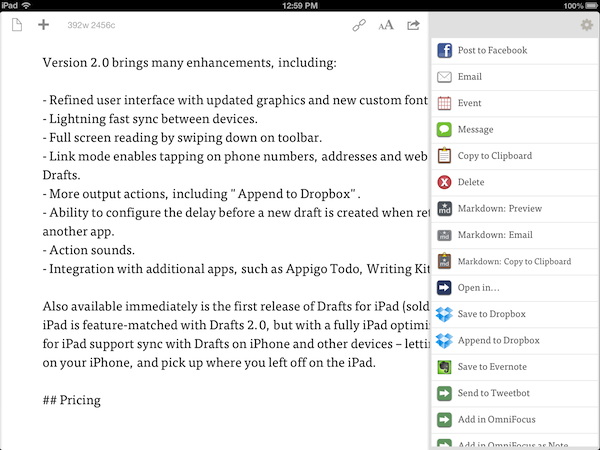 Perhaps the bigger story is Drafts 2.0 newest sibling: Drafts 1.0 for the iPad. The differences between little Drafts and big Drafts are subtle, yet notable. Drafts doesn’t lose its character on the iPad, although it forgoes the toolbar and instead utilizes the vast screen real-estate provided to add several character keys, a few cursor keys, and undo and redo buttons. Link mode and appearance tools are mapped conveniently in the top right corner, while actions slide in from the right instead of from the bottom. Settings interestingly is in two places: as a sprocket in the top right of the actions pane, and as an item in the list of actions near the bottom. Unlike the Drafts 2.0 on the iPhone, Drafts for the iPad combines the document picker and search into a single pane. Keeping your notes in sync between your iOS devices is Simperium, which is the service behind Simplenote. Simperium is an alternative syncing method to iCloud, which will soon be finding its way to apps like Instacast as iCloud hasn’t proven itself to be developer friendly, reliable, or fast (especially for files that aren’t simple documents). While the upside to Simperium is very fast syncing, the downside is that it’s yet another service you’ll have to sign up for (whereas iCloud is simply baked into iOS and just works in the background). I don’t necessarily mind that I have to create an account, especially considering the benefits, but the only inelegance of Drafts and its biggest irk is the initial alerts that appear when you first launch the app after purchasing it from the App Store. Instead, Drafts should present this information as part of an introductory tutorial or set-up process, which wouldn’t be as confusing or irritating as multiple, overlapping iOS alerts. Once Drafts buttons its collar, however, the remaining experience is elegant and not bothersome. (If you accidentally dismiss the prompt to log into or create a Simperium account, you can also enable it in the settings.) Drafts, updated for the iPhone and now available on the iPad, is nothing short of a solid update. Drafts, founded on the idea that you can capture ideas in once place then later polish them in another, can become a way of sharing a to-do list with your partner, getting class notes into Evernote, or moving a Markdown draft into a service such as Dropbox. It’s biggest advantage, as I see it, is that it takes away the ‘Open In’ action of sharing text between apps in iOS by simply providing multiple, direct ways to copy drafts to where you want them. Drafts 2.0 for the iPhone is a free upgrade for existing Drafts users, and $1.99 for first time buyers. Drafts for the iPad is separate, and can be had for $2.99 on the App Store. -"Drafts 2.0: New Fonts, New Look, A Brand New Kind of Sync, And Now On iPad"