The App Store is more than a decade old at this point, and with Issue 300 of MacStories Weekly looming, I spent some time looking at the apps we covered in those early days. I expected most would have fallen by the wayside, and many had. However, there were a surprising number that we still write about today like Instapaper, Drafts, Reeder, and Due.

Poking around in those old issues of Weekly inspired me to ask in the #apps channel of the Club MacStories+ Discord about the apps people missed from those early days. A lot of great apps came up like Mr. Reader, NewsRack, Sunrise, ProTube, Air Video, Tap Tap Revenge, and Copied, to name a few.

One category that came up a lot, both on Discord and in my browsing back issues of Weekly, though, was Twitter clients. The category was a hotbed of indie development in the early days of the App Store, thanks to Twitter’s open (at the time) API and its popularity as a service with developers and others in the tech community. 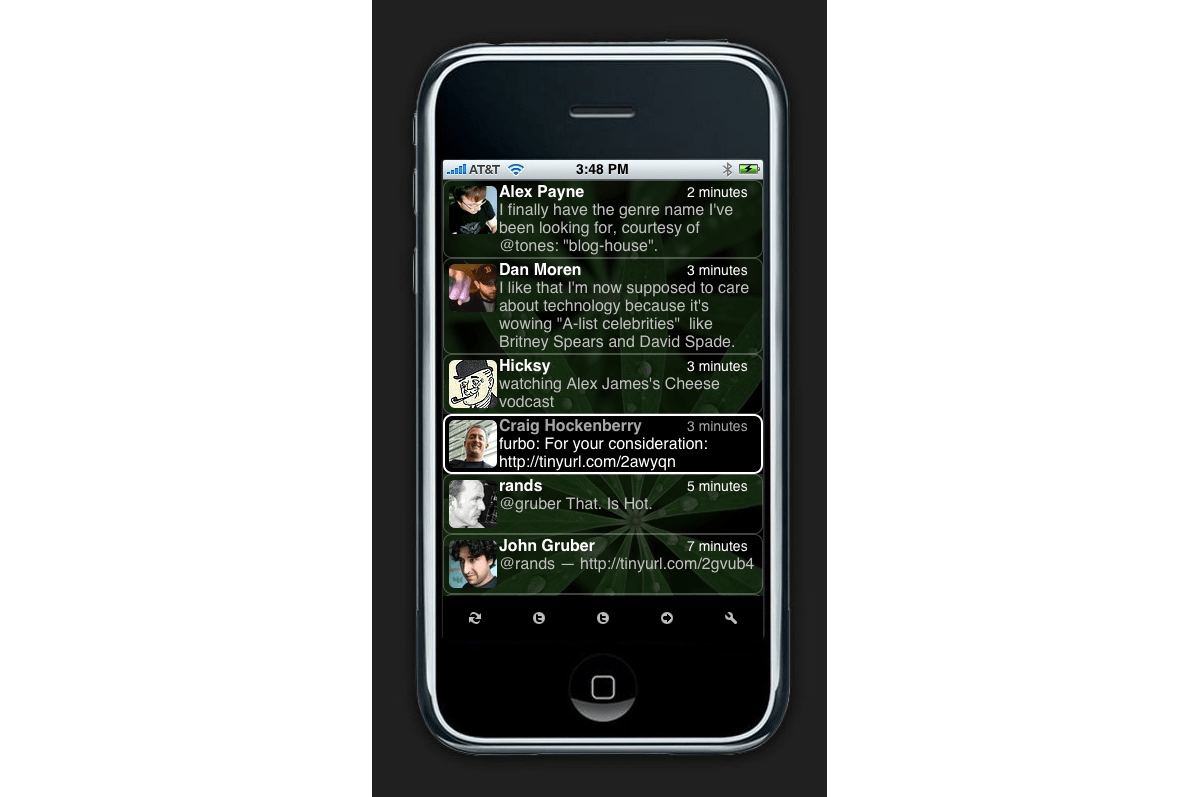 The first version of Twitterrific. Source: The Iconfactory.

It’s impossible to find a category of apps that has been on the App Store longer than Twitter clients. In fact, third-party Twitter apps pre-date the App Store itself. Twitterrific by The Iconfactory initially appeared on jailbroken iPhones before the App Store launched.

Twitter’s timing was good too. The rise of the service just so happened to coincide with the release of the iPhone. In the early days, Twitter provided generous access to its API, which made it an attractive way to experiment with building iPhone apps. The iPhone’s immature frameworks and the need to load a constantly updating stream of data were challenging for developers, but the iPhone was an exciting new platform, so they iterated quickly, coming up with innovations that helped popularize and shape the service. 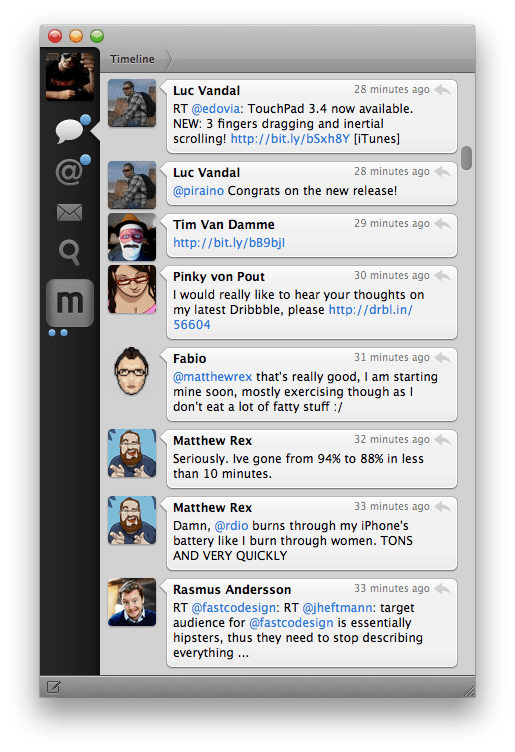 Third-party clients flourished in those early days and resulted in what remain two of the most popular Twitter clients today: Twitterrific and Tweetbot. But there were others too, like Tweetie created by indie developer Loren Brichter and later bought by Twitter. Tweetie was the first app to implement pull-to-refresh, a common gesture today that’s now built into iOS, but one that at the time, could only be found in a single app made by one developer. 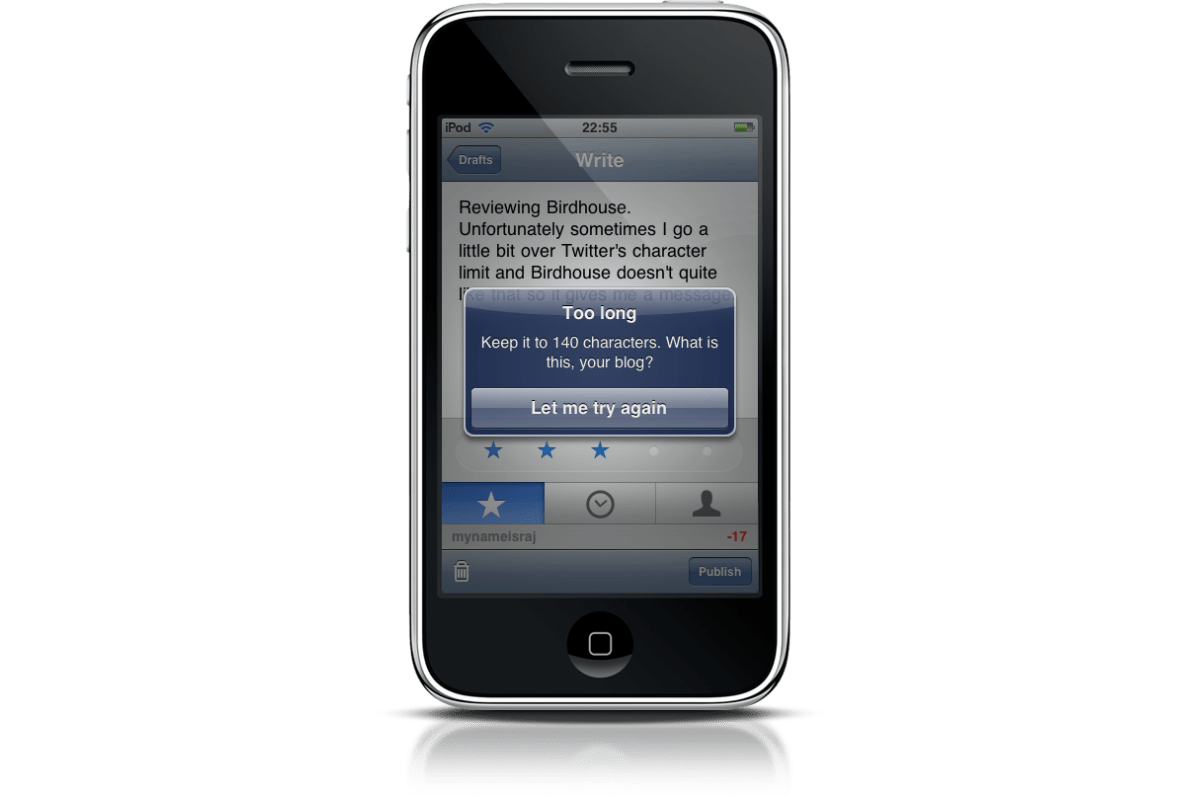 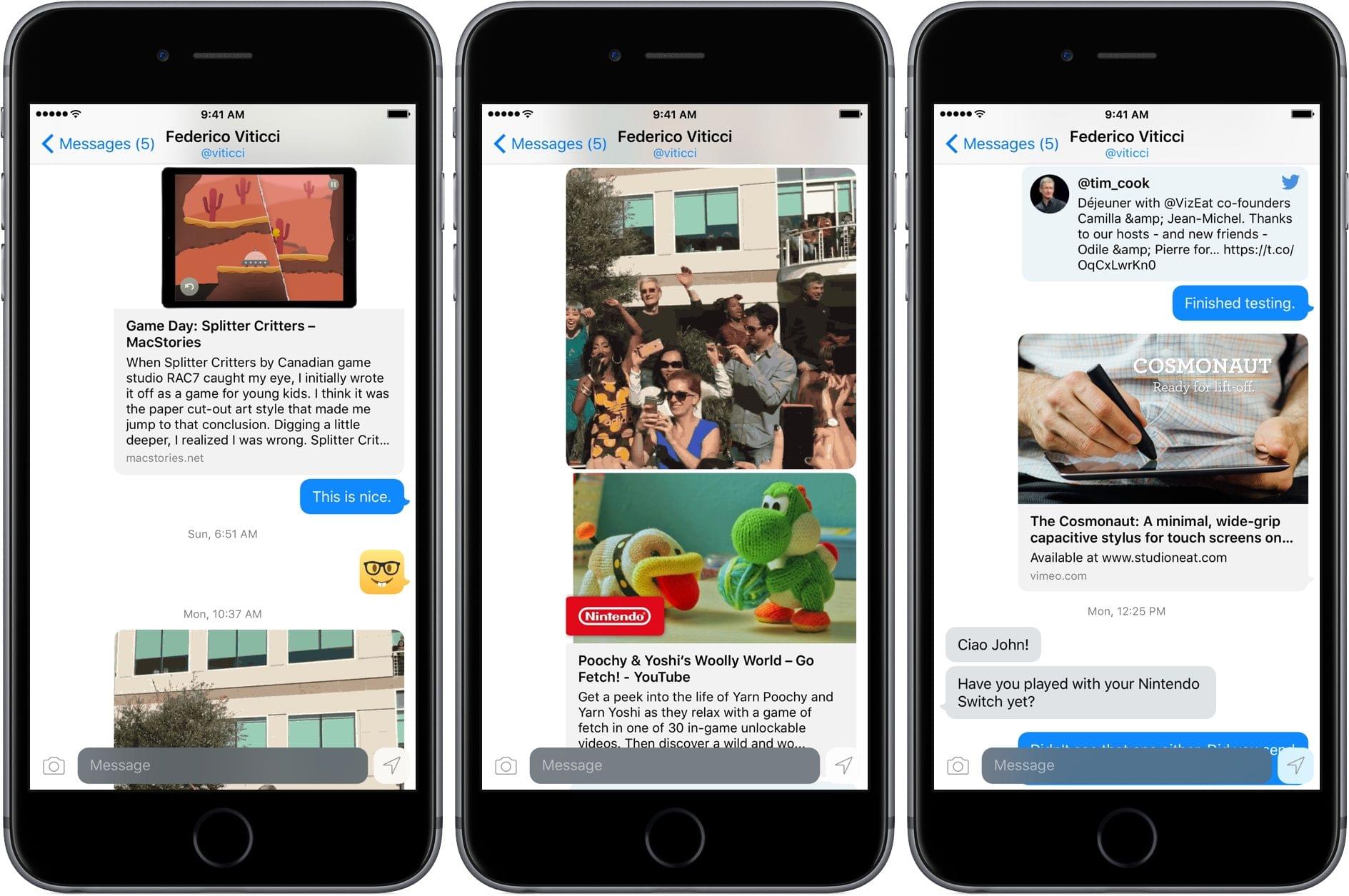 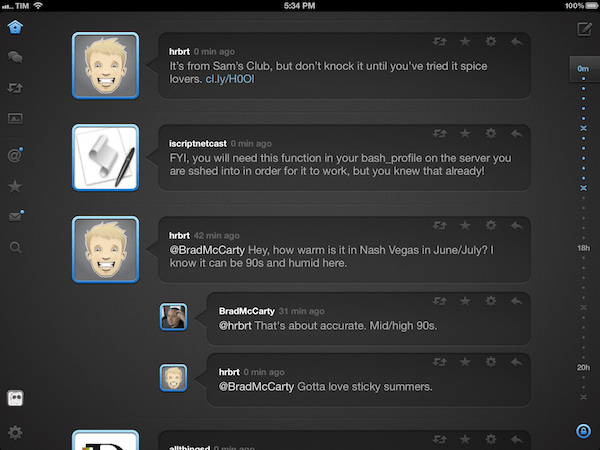 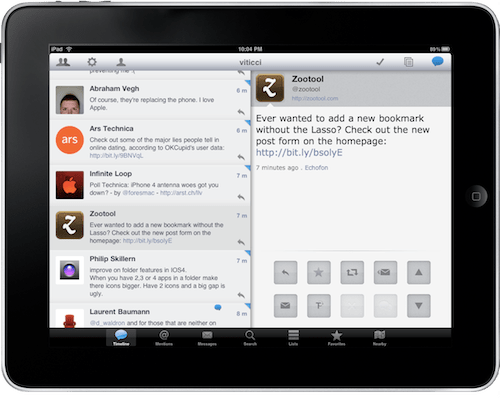 There were loads of other Twitter apps too, like Birdhouse for pre-composing and saving your tweets for publishing later, TwIM, an instant messaging system built on Twitter DMs, Quip, a conversation-focused Twitter client, and other clients like Osfoora. It’s a very long list, and few of the apps remain except as memories in stories like this one by Federico surveying the state of Twitter clients in 2014. With deep access to Twitter’s API and a brand new mobile platform that was tailor-made for a service like Twitter, it was an exciting time that pushed the boundaries of what was possible with both Twitter and the iPhone.

However, as Twitter grew, it found that it no longer needed third-party developers to grow its service. The process played out over multiple years, but few changes had a greater chilling effect on third-party Twitter clients than the company’s decision to cap the number of authentication tokens those apps could use to log in users. That, along with many other developer-hostile moves, effectively ended the golden era of Twitter apps.

However, Twitter did grant some third-party apps higher token limits, even while the company was simultaneously removing features from the API. Apps like Twitterrific and Tweetbot held on and have moved from paid-upfront apps to subscription business models, helping them continue in a hostile environment. 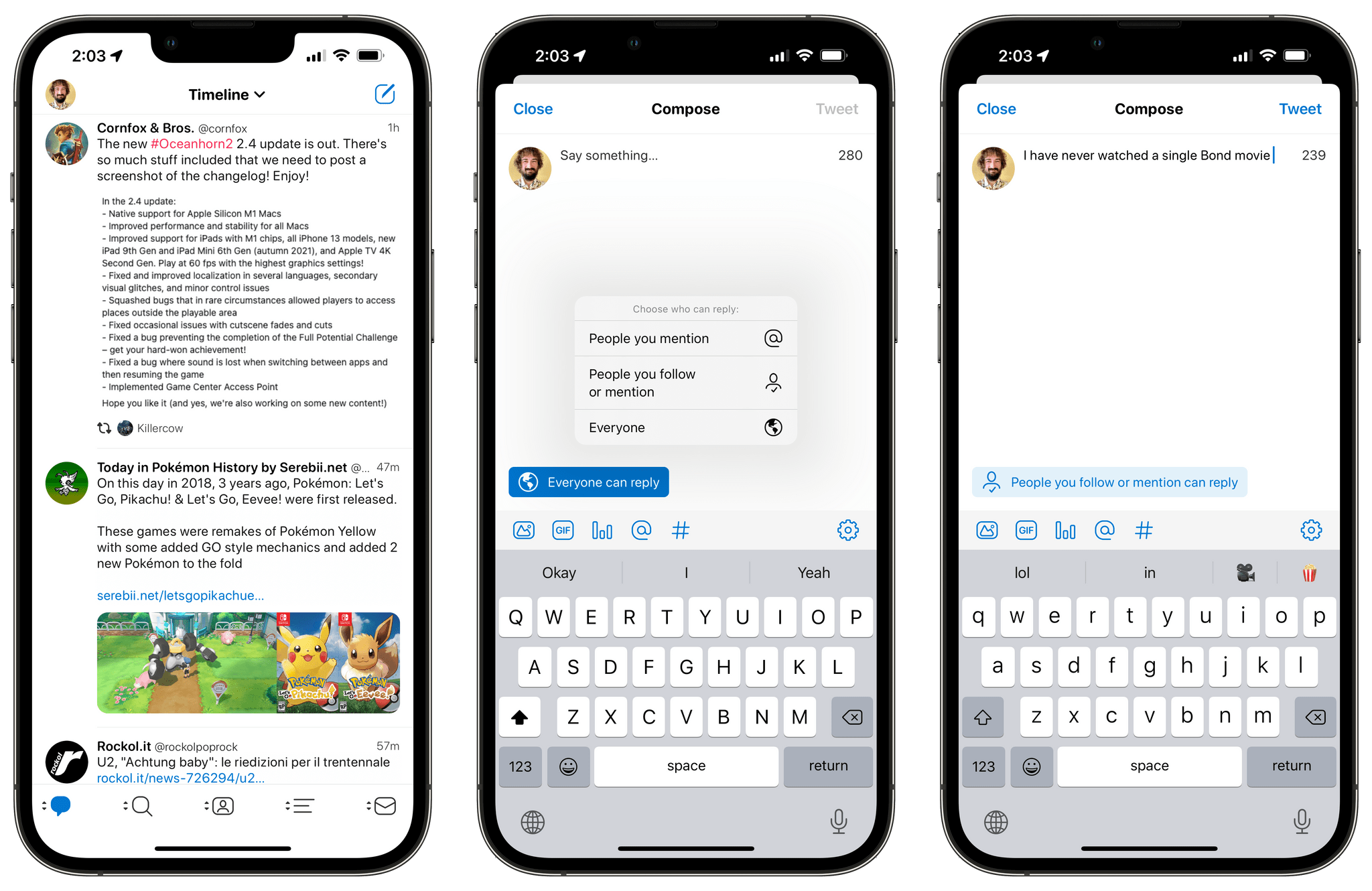 Today, Twitter seems to be trying to make amends with developers, which isn’t going to be easy. Twitter burned a lot of goodwill with developers, which makes the company hard to trust. However, version 2.0 of the Twitter API is allowing apps like Tweetbot to more closely match the official Twitter app’s feature set.

It’s hard to imagine the golden age of Twitter clients returning to the App Store. The official client is too deeply rooted with many users, and it still offers features that third-party developers can’t match. However, for users who want a different experience than the official app offers, there has never been a better time to jump in as the recent update to Tweetbot shows.

Also, despite years of developer-hostile decisions from Twitter, the stream of new and innovative apps from indie developers has never completely dried up. Apps like Aviary and the very recent Spring for Twitter show there is still room for new Twitter apps, and with the release of version 2.0 of Twitter’s API, I’m optimistic that we’ll see more new and interesting Twitter apps more frequently than the past few years.

I really enjoyed hearing from Club members in the Discord about their favorite apps from years ago. If you have a favorite Twitter app from the early days of the App Store, I’d love to hear more about it in the #apps channel.