Welcome to Automation April. Over the past decade, MacStories has become the hub for all kinds of user automation. Starting with URL schemes, then Workflow, and eventually Shortcuts, we’ve created hundreds of shortcuts for MacStories readers and Club members and published stories about automation that have been read by millions of people around the world. With the MacStories Shortcuts Archive, launched three years ago, we unified our catalog of free shortcuts in a single gallery; with the arrival of Shortcuts on macOS, we’ve expanded our Mac coverage for Club members and launched a new column and Discord channel all about automation. I love automation because of what it stands for: giving users – the people – the power to fully control their computer and make it more efficient. To make it truly their own. This is why I’ve been writing about the Shortcuts app for years and why I’ve always believed in it as the future of automation on Apple platforms: it’s the software equivalent of a bicycle for the mind. For this reason, I’m absolutely thrilled to introduce Automation April, a month-long showcase of automation on Apple platforms by us, developers, and MacStories readers – with a focus on Shortcuts. For the entire month of April, we will cover automation and Shortcuts – even more than we normally do – on every property of the extended MacStories universe. There will be shortcuts and articles on MacStories; we will post Automation April-themed episodes of AppStories; there will be special content in MacStories Weekly and AppStories+ for Club members; we will host special ‘Town Hall Workshops’ and a dedicated Automation April channel in our Discord community. But there’s more: In addition to all of the above, we are launching a contest to pick the best shortcuts submitted by MacStories readers for Automation April.

Kolide: Endpoint Security Powered by People; Try for Free! Starting Monday, April 4th, until Wednesday, April 20th, we will be accepting up to two shortcut entries per user via a dedicated Automation April website. The contest will be open to everyone with a free MacStories account (more on this below). We’ve also assembled a panel of Shortcuts experts who, alongside the MacStories team, will judge shortcuts submitted by people. Oh, and we’re giving away an Elgato Stream Deck XL and an Analogue Pocket for the Best Overall Shortcut prize. Yep, you read that right. April has always been a special month for MacStories: the site turns 13 (!) on April 20th, and this isn’t the first time we’ve organized a special event to celebrate our community. But with Automation April, we’ve prepared the biggest event we’ve ever done that will encompass every single aspect of the MacStories family – from the articles you know and love to Discord, the Weekly newsletter, and a brand new community contest. The next four weeks are going to be fun. So let’s dive in and let me give you an overview of what you can expect from the first edition of Automation April.

Thanks to Club MacStories, AppStories listeners, and MacStories readers, over the years we’ve been able to witness the creativity and ingenuity of incredibly passionate Shortcuts users. There is a thriving community of Shortcuts creators out there – folks with different backgrounds who are constantly coming up with new ideas to automate, speed up, and customize Apple devices through Shortcuts. With the Automation April Shortcuts Contest, we want to put the spotlight on the creator community by celebrating the most impressive shortcuts we’ll receive via free and open submissions. We will post the full set of rules and instructions when the contest kicks off on Monday, April 4th. But here’s what you can expect: This year, we’ll be evaluating shortcuts across four different categories: 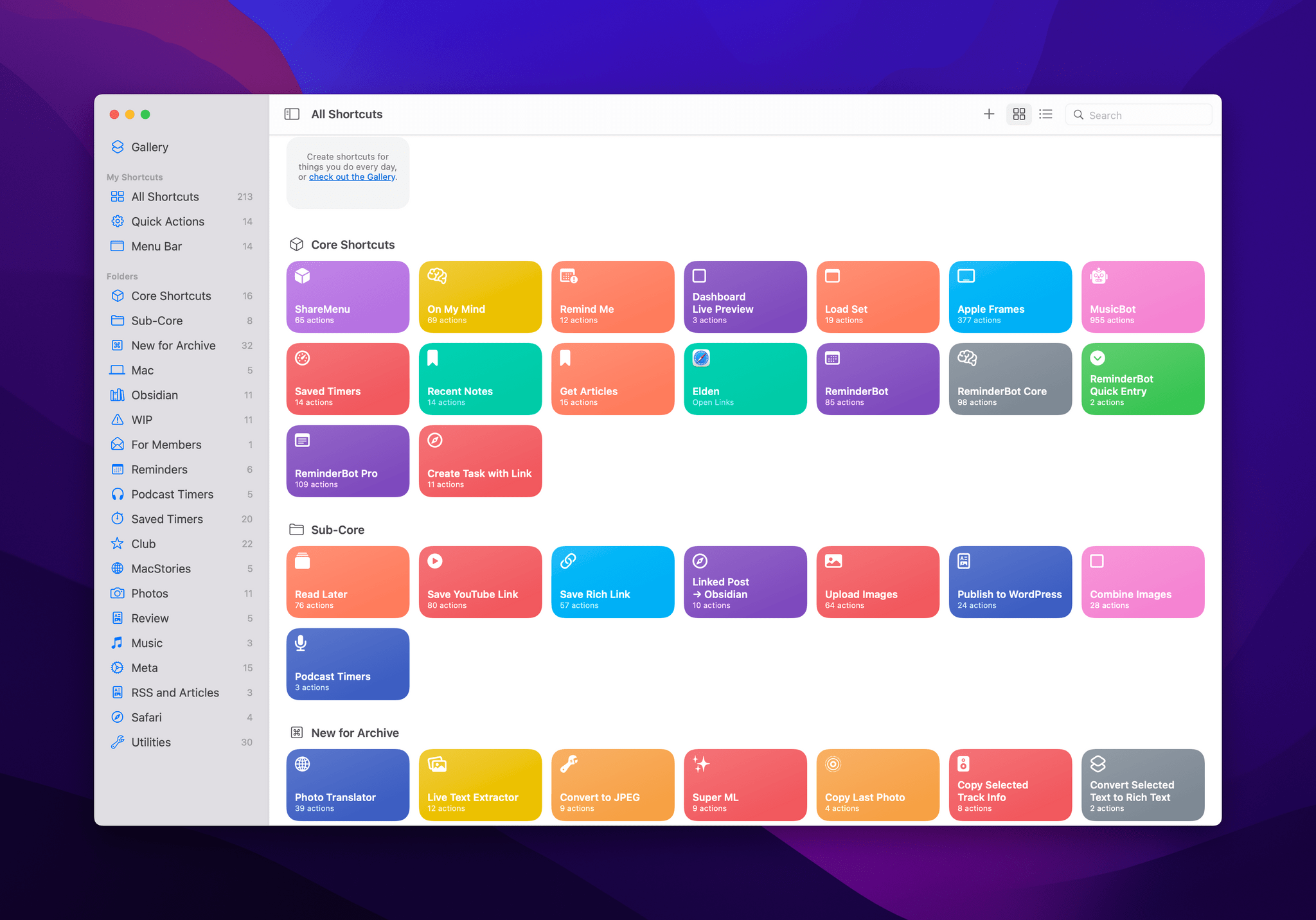 Some of the shortcuts I’ll be sharing on MacStories during Automation April. It wouldn’t be a MacStories event about Shortcuts and automation without fresh content to go along with it. And I’m happy to say that, since we started working on Automation April last November, we’ve prepared a great lineup of articles and shortcuts to share with everyone on MacStories throughout the month of April. Obviously, I don’t want to spoil the entire slate of MacStories content we’ve prepared in advance. So I’ll just share two things you’ll find on MacStories as part of Automation April. I will be releasing 30 shortcuts for free on MacStories across three weeks. These shortcuts span all kinds of categories and levels of complexity: there will be shortcuts that take advantage of new features in iOS 15.4 for Translate and Live Text; there will be Mac-specific shortcuts; there will be shortcuts comprised of just a few actions that do one thing well and others that will be a bit more complex. All of them will be released for free on the MacStories Shortcuts Archive; look for the first installment with 10 shortcuts early next week. John also has quite a few shortcuts and stories planned for MacStories. The one I’m most intrigued to see out in the wild is his custom Watch Later system – a Shortcuts and Hazel-based automation for creating a virtual music video channel on Apple TV. I know he’s been working on this for months, and I can’t wait to see it in action. This is just a small taste of what you can expect for Automation April on MacStories. Plus, you know us and how we operate: we’ll be saving some surprises for later in the month.

MacStories Weekly and Other Club Perks 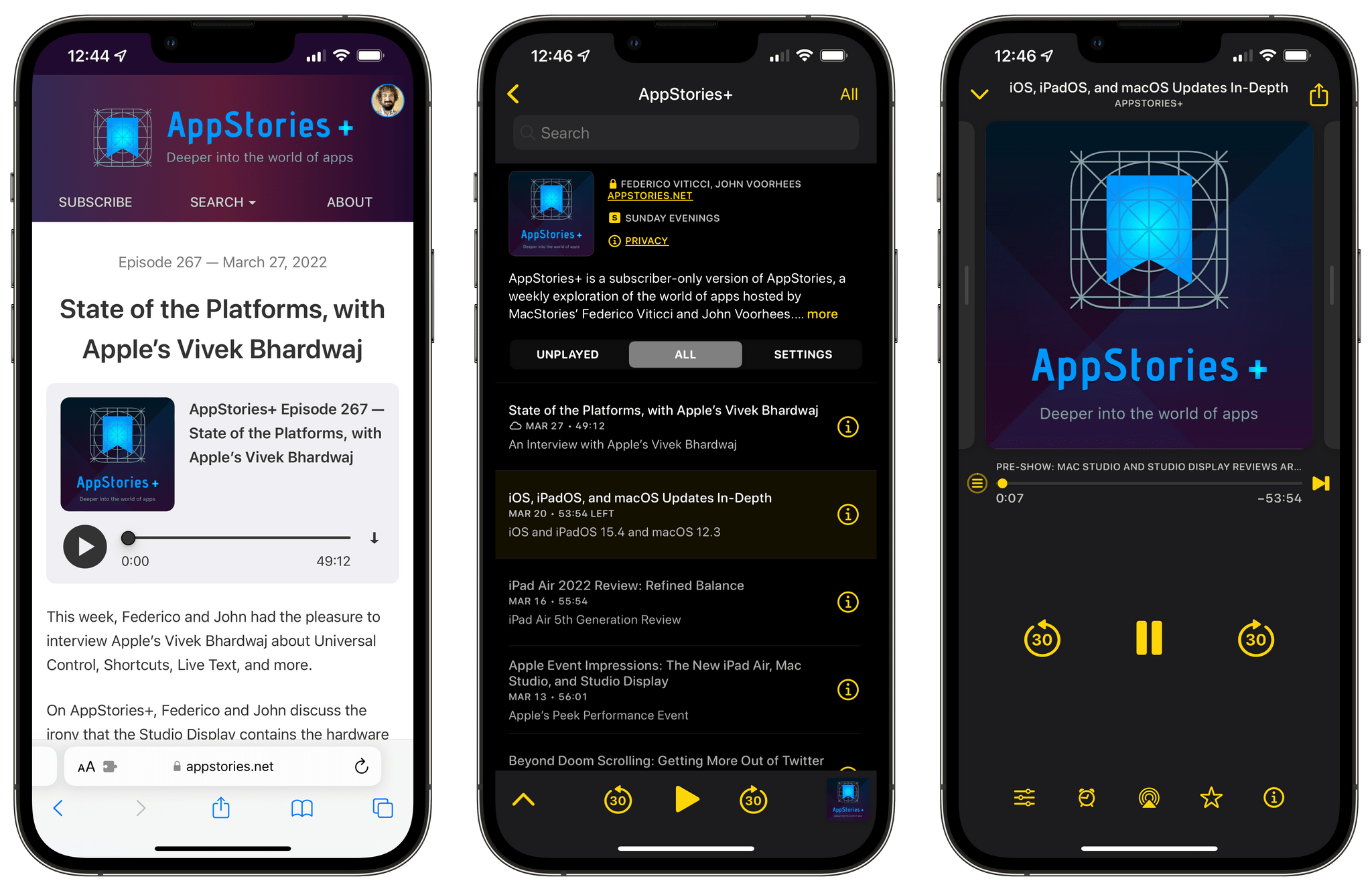 The AppStories website and AppStories+ in Overcast. But what about the podcast? We’ve got that covered, too. For the month of April, we’ll be releasing special AppStories episodes with a focus on specific Shortcuts topics and interviews with developers of apps that integrate with Shortcuts and fellow Shortcuts creators. Our goal, as always, is to rely on AppStories to expand the conversation around articles on MacStories as well as highlight different voices in our community. Automation April will also be the focus of the exclusive pre-show segments of AppStories+. In case you’re not familiar with it, AppStories+ is a premium version of AppStories that is ad-free, comes with an additional segment, and is released in high-bitrate audio one day early for members. You can subscribe to it standalone or get it as part of the all-access pass that is a Club Premier subscription. 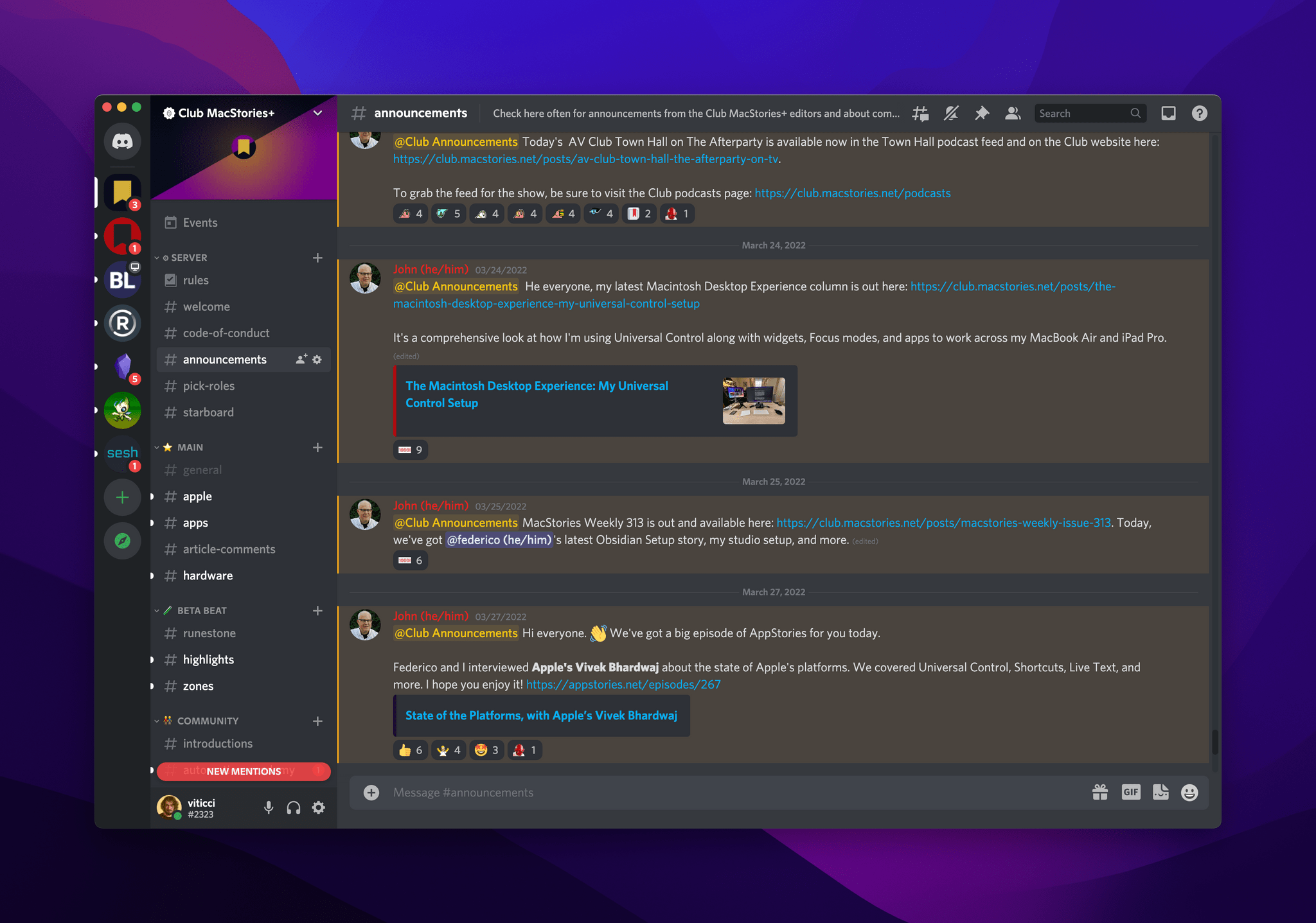 The Club MacStories Discord server. The place where all of the above comes together is our Discord community for Club MacStories+ and Premier subscribers. We have big plans when it comes to integrating our Discord community with Automation April’s festivities, and I’m excited to kick things off in Discord today. For starters, we’re launching a dedicated #automation-april channel on Discord where members will be able to share tips, discuss Shortcuts techniques, help out others (if they’re up for it!), and talk about their submitted contest entries. I’ll also be spending time in the channel to chat with members and provide guidance along the way, whenever possible. My personal goal is to turn this contest into a healthy competition that is openly discussed and that can serve as a learning opportunity for others, which is in the spirit of user automation and Shortcuts. Along those lines, we will be hosting two special Town Hall Workshops on Discord where I’ll talk about advanced Shortcuts techniques, answer questions from the audience live, and explain how I come up with ideas for my shortcuts. We see these workshops as a way for Discord members to learn how to design shortcuts for others and, hopefully, get some inspiration for shortcuts they’d like to submit as part of the contest. Lastly, our Discord server is also where weekly raffles will take place. We’ll share more details on these raffles later, but, suffice to say, you can expect a variety of giveaways exclusive to Discord members that will include app promo codes, extensions of Club accounts, and more. I can’t wait to see contest participants and readers interested in Automation April on our Discord. To get started and join our server, you can sign up for or upgrade your existing Club MacStories account to Plus or Premier here.

So that’s Automation April: a month-long celebration of automation on Apple platforms with a focus on Shortcuts, encompassing everything we do at MacStories, and with a brand-new community and contest to go along with it. Our goal is to turn Automation April into a new annual tradition in our community of people who work on Apple devices and want to get more out of them. We want April to become “automation month”, which is why we’re already saving ideas for what we want to achieve in Automation April 2023. But one step at a time. Welcome to Automation April. I’ll see you on Monday to kick off the contest and our other initiatives. Happy automating!